MOFA Submission on Performance Based Funding 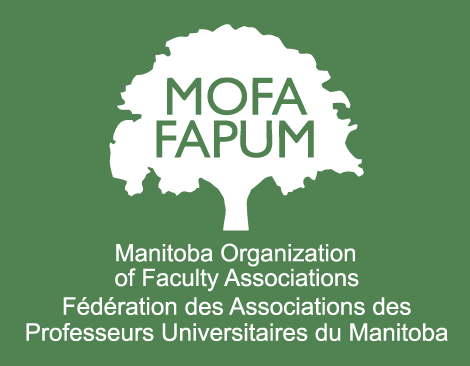 The Manitoba Organization of Faculty Associations (MOFA) is comprised of members of faculty associations from Brandon University, Université de Saint-Boniface, University of Manitoba, and the University of Winnipeg representing over 1,600 individual academic staff.

MOFA is a proud member of the Canadian Association of University Teachers. We are based on both Treaty 1 and Treaty 2 territories, and the homeland of the Métis Nation.

MOFA strongly believes that we need a post-secondary education system that:

Perhaps the greatest flaw with performance-based metrics is that they disadvantage already marginalized students, such as students from ethnic or racial minorities and from students from low-income backgrounds. This model fundamentally undermines the core mission of our universities, including improving equity and access to higher education. Tying funding to graduation rates creates incentives for administrators to make admission criteria more selective to favour students with a higher probability of graduating on time. This results in what is known as “creaming”.  That is, restricting admission to those students who have the very best prospects for success based upon entry criteria such as grade-point average or standardized test scores on entrance exams[3]. Abundant evidence shows that ‘creaming’ disproportionately harms historically marginalized students including those from low-income backgrounds and/ or minority groups[4]. Interestingly, the first evidence of ’creaming’ was found in Tennessee and Florida, early adopters of performance-based funding[5].

Failure is not an option: performance-based funding erodes educational quality

Improving graduation rates of poorly performing students is a resource-intensive exercise. It requires close monitoring of the academic progress of each student, and the provision of extra resources such as counselling, one-on-one tutoring, and direct funding to students so they don’t need part-time work to support themselves. Where performance-based metrics are imposed without the provision of funding to cover such costs, the American experience with performance-based metrics suggests that colleges and universities take a different approach: lower academic standards, something not routinely included in the performance funding metrics.

A large body of research on the experience of performance-based funding in American state systems shows that over time such metrics increase the disparity in funding among institutions.

In Manitoba there are clear disparities among the four public universities, with the smaller universities having less financial flexibility than the one large university, the University of Manitoba. With a lower fiscal capacity at the outset, performance-based funding clearly has the potential to do great harm to the three smaller universities. The PBF model will only undercut the capacity of these institutions to meet their mission, forcing them to be less inclusive rather than more.

Performance based funding does more harm than good

Researchers[6] note that the preponderance of evidence shows that performance-funding policies fail to improve postsecondary outcomes, which raises the obvious question: why bother? If there are no benefits and large costs, a straightforward cost-benefit analysis suggests one should not proceed. But governments across the world, including a majority of American states, have introduced performance-based funding schemes. Why?

Australia, where another Conservative government implemented PBF, has cut hundreds of courses and majors at their universities in fields as wide ranging as science, information technology, mechanical engineering, gender studies, music, theatre, mathematics, religious studies and economics. At Macquarie University in Australia 31 degrees or combined degrees in the faculty of science and engineering were on the chopping block, along with 30 out of the current 56 offered majors in the faculty of arts.

There is every reason to think that Manitoba’s experience with PBF will have the same inequitable consequences that it has had in Tennessee, Australia and elsewhere. As the Manitoba government interferes directly with university budgets and tuition levels, as well as emphasizing labour market alignment over quality education (see Horizon Manitoba and the aptly named Government of Manitoba’s Skills, Talent and Knowledge Strategy document) we can expect similar consequences here.

Manitoba universities follow and contribute to the standards established by the national and international university community and professional certifying organizations so that their students can enter graduate programs and qualify for jobs around the world. Manitoba universities already train the vast majority of the province’s professionals in health sciences, agriculture, engineering, science, social work, social sciences, humanities business and education. MOFA implores the government to publicly identify what exactly our universities are failing to do.

Bill 33 represents a further attempt by the PC government to interfere in the internal governance and academic programming of our universities. What are they trying to fix, based on what information or expertise?  The effect of Bill 33 is a politicization of academic programming at university and allows the minister to pick and choose which programs are politically acceptable. This intrusion of government into the internal affairs of the university undermines the very concept of university, as the courts have ruled, and the essential principle of both academic freedom and university autonomy.

The provincial government has failed to present a compelling case for the introduction of a PBF system in Manitoba and has also neglected to identify where the post-secondary education system has fallen short. In the absence of this data, it is the opinion of MOFA that such a scheme would only be introduced with the long-term objective of further reducing government funding for post-secondary education.

In response to consultations on this issue, MOFA calls on the provincial government to do the following:

MOFA thanks the provincial government for the opportunity to provide feedback on this crucial issue that will provide a direction for our universities, faculty, and students. We encourage the government to engage in sober second thoughts and to reconsider these proposed policies, which could have a disastrous effect on our universities and indeed, the future of our province. MOFA also wishes to thank MOFA and UMFA past president, Robert Chernomas, for their contributions and research on this issue.

On behalf of the MOFA Executive Council,

← <strong>Students and faculty give the government failing grades on post-secondary consultation</strong> MOFA and RRCFA: Faculty members leave consultations with more questions than answers →
Back to All News